MOST people still believe that stretchable and conformal electronics (SCEs) are academic curiosities with no particular market. This belief appears to be based on proof-of-concept studies that are occasionally published, based on the results of those rare devices that happen to work well. Even when companies demonstrate prototypes, it is easy to dismiss them as mere marketing exercises devised to make their inventors look like R&D leaders.

However, with regard to the SCE industry, there is much more than meets the eye. At IDTechEx (the market research firm at which we are based), we have been researching this technological frontier for several years. In this article, we will describe how many of the simpler and less glamorous aspects of SCE have already been commercialized or are on the cusp of being commercialized. And we will discuss two major trends underpinning interest in SCE: (1) wearables going truly wearable and (2) structural electronics. Furthermore, we will argue that viewing SCE as a single entity is grossly misleading. SCE is an umbrella term under which exist many different technologies and applications. It is appropriate to view SCE as a collection of disparate niche applications and solutions.

Each of these categories is very different in terms of underlying technology, readiness level, target markets, and current and future earning potential. In fact, in a recent market forecast, our team tracked 42 separate categories of wearable devices, with an overall growth from a current base of around $US35 billion to more than $US155 billion by 2027.

There is often little unifying these disparate technologies. Indeed, there is a real possibility that the divergent fortunes of these categories will render the umbrella term of wearable technology irrelevant in the not-so-distant future.

Despite this pending divergence, a common trend across nearly all devices is a change in form factor. If you scan the current landscape of products you will soon find that they are simply old, rigid components assembled into a new «box» that can be worn somewhere on the body. Nearly all these components are borrowed from existing industries such as the consumer electronics, medical, or automotive sectors. There exists relatively little hardware innovation for creating truly wearable devices.

This is changing. As shown in Fig. 1, companies large and small are beginning to make wearable devices truly wearable. Often, these are early-stage exploratory products that have been developed to test the waters and are not yet mature, tried-and-tested, finished articles. 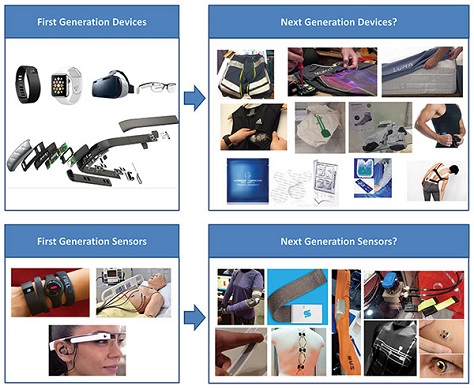 Fig. 1: Wearable devices are beginning to transition from rigid components in boxes toward truly wearable devices. So far, nearly this entire market is served by existing sensors borrowed from other industries. However, we now see the rise of new sensors made with wearability in mind. Image sources: Fitbit, Apple, Samsung/Oculus and Google, and IDTechEx photos of Clothing+/Myontec, Bainisha, Toyobo, Parker Hannifin, EMS/Nagase and others.

Work toward creating truly wearable devices includes all required parts of the system. There is progress in stretchable and/or conformable batteries, transistors/memories, displays, sensors, PCBs, and interconnects (stretchable connections). Most SCE components are, however, still at a very early stage of technological readiness. Here, therefore, we focus on stretchable interconnects and sensors as two examples of SCEs that are already commercial or on the edge of being commercialized.

Interconnects may seem like simple elements, but they are crucial in enabling truly wearable textile-based applications. Currently, there are several approaches for creating textile-based interconnects, including fine metal wire and metal-coated fiber/yarn. Stretchable conductive inks are also emerging as a serious contender to fulfill this role. This is because conductive ink technology is highly adaptive, enabling custom products to be developed to satisfy different price and performance (conductivity, stretchability, etc.) requirements. This is critical at this exploratory stage of the market when the customer requirements are not fully known and can be very divergent.

Inks have a further advantage in that they are a post-production step that can be universally applied once a textile is made using existing unmodified processes. Indeed, ink technology has the potential to piggyback onto existing infrastructure and know-how for screen printing graphics on textiles.